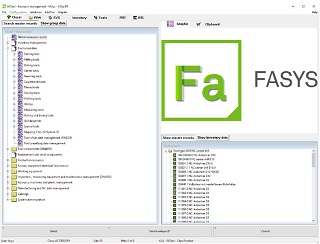 A wide range of new enhancements have been made in FASYS 2022.1. These include major upgrades to areas such as:

In FASYS 2022.1, a new database layer is included in the FASYS application. This gives home office workers better support, because the database connection is opened only when needed. When there are network connection problems, the application can reconnect to the FASYS database.

In FASYS 2022.1, new logging is available for physical tool management. The new classes KWZISTLOG/SN have been created to store this logging information in the database. Every change on a physical tool is logged with the help of database triggers. This benefits the analysis of physical tool changes in support cases and it can be used for reporting of physical changes over time.

It is now possible to run the FASYS backup with a Delta Logic connection to download NC files from the NCU. The changes on the machine will be detected, compared, and stored as a backup in the FASYS database. The backup functionality is included in the standard software.

It is now possible to write new tool information via DeltaLogic API into a Sinumeric 840D control. Furthermore, the tool data can be read out from the control via the tool number or ID. The data is provided from the KWZIST class. With the help of the Delta logic interface, users can make a tool data inventory from the machine.

Configuration of buttons in shopfloor client

Users can add any number of buttons in the shopfloor client. Via an XML configuration, it is possible to set up, for example, a DNC-button which can start the tool inventory.

Tools can be selected with a holder number and then transfer via DNC Server to the machine in the machine control.

The .Net core 3.1 will no longer be used and has been updated to .Net 6.0. This currently affects the shopfloor client back-end. Due to the multiple performance enhancements of the .Net 6.0 version, the shopfloor back-end performance is increased.

The component SQL compact is no longer supported by Microsoft®. The dependency to SQL compact has been replaced by the SQLite, to enable the return of usual reporting functionalities.

A new interface to PTC® Creo Parametric 9 has been developed.